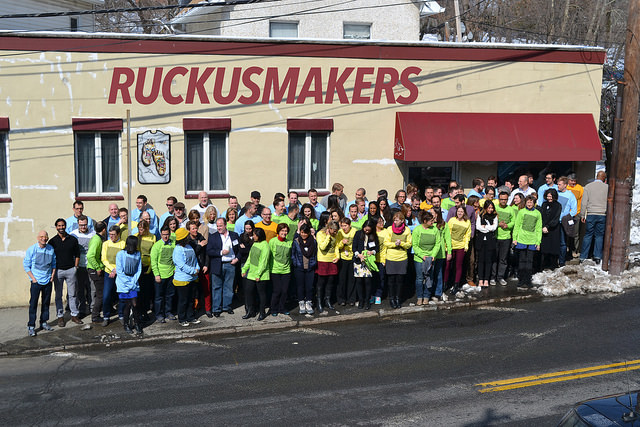 As I type this, I’m sitting in the terminal at LaGuardia returning home from Seth Godin’s “Ruckusmakers” conference. I feel like I’ve been drinking from a firehouse for the last two days. I had high expectations for the weekend and they were exceeded. Not only is Seth as good in person as he is in writing, but the group of attendees was – well, remarkable.

I met people from New York, Boston, LA, Atlanta, Phoenix, Missouri, Canada, London, Paris, Brazil, and Australia. Seth’s advice for the weekend was to get “naked” (not literally, thankfully) and be real. When I first walked in the door, I was a little late due to flight delays and was scrambling to find a seat. Almost immediately, there was a break and the mingling began. My instinct was to go into my standard networking question and answer script (that’s designed to keep people from realizing that I’m actually an idiot), but the other people there were so welcoming, open and real that I was immediately jarred out of auto-pilot and into an actual conversation. That continued for the duration of the weekend.

The assignment for the weekend was to find and commit to a project that will make a change in the world. Stay tuned for more on that (as well as other topics from the weekend).

Seth frequently explains behaviors with the phrase “people like us do things like this”. To flip that around, it was nice for the people that do things like this (who read Seth and appreciate his insight) to be around “people like us” for a weekend. If you’re interested, the next best thing to being there would be to get Seth’s latest book What To Do When It’s Your Turn (and it’s always your turn) or Leap First, a recording of a similar presentation.